My journey towards Kunduz was full of scenic delight, I saw for miles over the plaines where there was nothing for as far as the eye could see, but shepard huts and cattle gazing. It was lovely but certainly not good for my water or food situation. so at every little hut I found on the road or indeed off the road I took advantage of. One night I found myself in the middle of the plaine come nightfall and decided the only course of action would be to camp out under a pile on which was about 2km away from yurts in both directions. It wasn’t too windy and the sky was clear. It surely would have been a great night sleep. As I got ready to camp as the sun fell below the horizon I found myself pleading for nothing to happen in the night and I found myself making bargains with whoever was listening, that I would return the favour, if that tonight went off without a hitch. That night wasn’t the best night sleep I had ever had. I found myself awoken by a herd of nearly a hundred sheep walking around me. In a half sleepy daze I completely did not understand what was going on until a few moments later as two men shone a torch over to me. As the torch made its way over bouncing with their steps I quickly but calmly tried to make my way out of the coffin shaped bivy I was in, which was hard. as they drew closer their silhouettes became to resemble that what I had seen all the day previous, a shepard. As they approached they said some words that I did not understand and finally stood about 10 feet away from me. Again repeating themselves. All I knew to do was in Punjabi tell them where I was from (in this case India) and that I was on my way to Kunduz. They recognised the key words and eventually left. As I settled back down unsure whether or not to carry no walking as to not be there if for any reason they came back, I heard more voices. The two men that had stopped had gone to the yurts and brought back with them what I could only describe as a elder who for some reason spoke Punjabi. I repeated as best I could what I had told the boys and they were very kind, we exchanged words in Punjabi and they told me a few words in Dari and asked me if I would like to come to their yurt for some milk and bread. As nice as it sounded, it being the middle of the night and for obvious reasons, I kindly declined. Going around in circles for 10 minutes they eventually accepted my decline of their offer and left after hand shakes all round. I tried to get back to sleep but it was no good, I stayed awake all night till I saw the beginning of the sun rise. As I got up and began packing my things the two boys I could only presume who were from the middle of the night returned to watch me pack my things up and attempted one last time to convince me to have breakfast. To which I kindly declined and began back on my journey to Kunduz.

My walk into the centre of Kunduz was an interesting one. On the way I was was stopped by an officer in a open top military humvee. He was alone and told me to get into the back of the van, he was at the time pointing an automatic weapon at the lower half of my body, not I think with intentions to use it but I think in a kind of more relaxed aiming of the gun in my relative direction. There wasn’t much I could do as I naturally assume I cannot outrun bullets and so decided to go with him, I got in the back of the van and decided in my mind that we must be going back to the last military check point because he was unaware I had already stopped there, as he was coming from the opposite direction, as he couldn’t see me I took a few minutes out of my panic to get my camera out and record a few second in the vehicle. Suddenly about 2 kms down the road he took a sudden swerve off the road and into the fields directly away from the road about another 3 kms. The humvee stopped and I heard the man get out of the car. He came round open the door as he walked round a million things ran around in my head as to why we had come out all the way to here. He opened the door this time gun not drawn. Told me to exit and proceeded to ask me to empty all my pockets and search all my things. As always I obliged as I didn’t fancy asking a heavily armed man why, (another word I had committed to memory) after he went through everything he still didn’t seem too happy. He showed a lot of interest in my camera but didn’t know how to use it so I told him the battery was dead. After a quick phone call he received, a comprehensive look through my passport and the arrival of another man dressed in casual attire, but still wielding an AK47, I was told to go… just go… as simple as that… I had to traipse back through rough ground and potholes 3 km to the road then back 2 km up the road from which he took me.

10 kms down the road I came across another checkpoint at a bend in the road, to my frustration as I had just past it and was about 100m away from it, they shouted demanding me to stop, so they could catch up with me. Once they did, they demanded that I get everything out of my bag so they could see it all. At this time it was raining and I was tired from the lack of sleep from previous nights and decided to play dumb which in retrospect wasn’t the best idea. The situation seemed to escalate from nothing, and ended up with one pointing a gun at me another grabbing me and dragging me to a car he had flagged down and told to take me to Kunduz. As I tried to argue with him as he pushed me towards the car he just persisted in shouting louder. I got in the car and funnily enough the man seemed quite pleasant, considering the military had just shoved a soaking wet foreigner in his nice clean car and was told to transport him to the next town. Immediately after the car started moving I watched the soldiers start returning to their checkpoint disappearing around the corner. I then decided to start negotiating my way out of the car. I kept tapping him on his shoulder and pointing at the side of the road. eventually he got the idea and I was able to successfully get out of the car within moments of getting into it. The man driving thought I was nuts and as I had seen the men walking back into the checkpoint, casually but quickly I wandered back and walked from where he had shoved me into the car. Looking back now, I’d say that wasn’t the best idea, but at the time I was taking the little victories where I could get them and I remember being so proud of myself for gaining those few hundred km’s back. 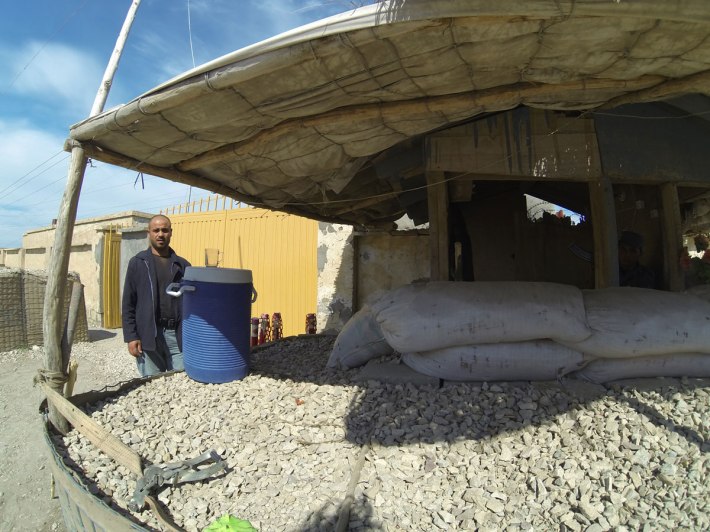