We were hungover. Mohammed gave us a lift back to the cafe and wished us luck, and we sat and stewed there for a while. Thankfully there was a bit of cloud cover, but it all dispersed when we got up to leave, and it got hot again. We staggered walking, suffering immensely in the heat, and stopped in a makeshift tarp room by the roadside where a couple were providing meals and drinks. Lovely people, they sat us down and sold us cold drinks, and as we stumbled off to find camping they gave us a melon and more cold drinks. A very random but welcome find.

The heat didn’t let up and we were both beginning to feel awful, we suspect from the large amounts of tap and well water we had been given and drank. We put our heads down and continued on knowing that we were getting ever closer to Shymkent and that days off resting were days wasted. We stopped in a cafe and went against that mindset by sitting in shade for most of the day, watching a group of men hang around in a hole we assumed to be an under construction well. A driver gave us some water, bread and melon, and we found a patch of trees to camp under.

We for some reason got no sleep, and Arjun woke up feeling deathly. We slowly made it to a shop where we stopped for an escape from the heat, and down the road a couple of roadworkers, Tolik and Bacha, invited us to shower at the back of their trailer and have some food. Really nice guys who also filled up all our water bottles and gave us some fruit as well, Arjun struggled to even manage a bite, feeling awful. We left and only made it 10mins down the road before needing to stop, the heat was abominable and we’d somehow lost the wooden spoke again. Kieran whittled another one, and using bottle caps made it a proper wedge, but after starting again we barely made any distance before having to stop for a long rest, with Arjun taking shelter under the cart and feeling on the point of collapse. We got to a phone tower later in the day and rushed up camp so we could try and get some sleep, but as if things couldn’t get any worse the ground was appalling, with neither of us getting a single moments sleep.

The awful night and early, hot sun threw Kieran into a state as bad as Arjun, not helped by the shock of having an actual Black Widow crawl over his had as he went to get water off the cart. We walked for no more than a couple of km and stopped at what seemed like a house converted into a cafe, where after chatting with the guy working there for a bit, and trying his varied fermented camel milks, we actually slept. We put our heads against the table and both passed out. We slept for a good couple of hours and then staggered between two and five km walks with sleeps in between. That night there was heavy rain and it was ridiculously clammy, but we got sleep, and Kieran woke up feeling much better, but with sweat soaked sleeping gear.

On the road we met three Russian cyclists who had again heard about us, but we were too weak feeling to really engage in conversation, so they wished us luck and continued on. We made it to a town and collapsed in the first restaurant we found, luckily just as a thunderous rain cloud passed over. Before we left we replaced all water on the cart with bottled water, we hadn’t been eating the past few days because we felt so bad so we deducted that it must be the water. On the way out the roads turned bad again and there even a few hills, but we made it far enough to get a town in sight before camping, with more heavy rain in the night.

The town was useless but for a small shop which sold ridiculously sweet drinks, and full of rollerblading children. We left and walked on until Shymkent was in our sights, and stopped with some policemen under a bridge to rest in shade for a bit. One by one the police came over and chatted, all very friendly, one of them let us use a maps app on his phone to check the road ahead for camping. There wasn’t much, but we pushed the limits and found a field off the road which suited us. We had began feeling a bit better, but still extremely weak, and were eager to get into Shymkent the next day. 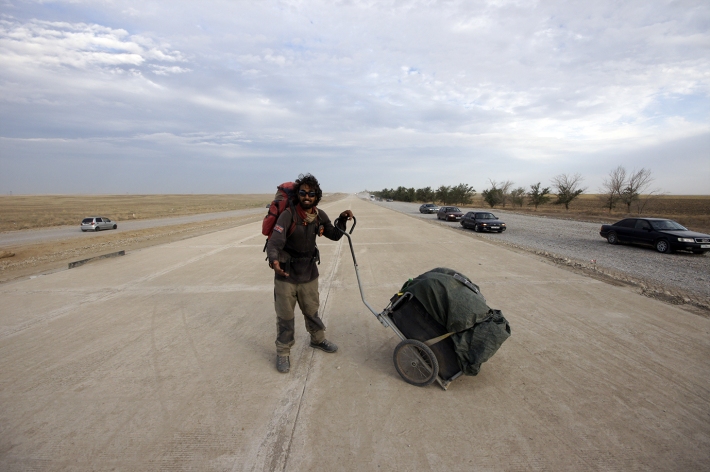