Kazakhstan had become a pattern of walking into nothing, with nothing happening, and then arriving at a town or village, and it usually being very horrible (though there were some nice people).

The next village we came across was good. We stopped by a small shop, and while waiting for it to open watched a family use a communal well. We were told later that in the villages none of the houses have running water, and would have filmed it were it not for a suspicious group of young men watching us from over the road. When it opened the shopkeepers were lovely though, and a couple of guys from a delivery van who arrived whilst we waited gave us ice lollies and sat down to chat without going through our stuff. On the way out a kid helped us find our way to the road and across a stream, and once back on the road we found a decent cafe, where as we sat with a drink a couple of friendly families stopped to chat.

That afternoon we pressed for good distance, and that evening the handle on our cart snapped.

We were able to slot the handle part into what connected it to the cart, but it was loose and easily slipped out. Dealing with this new awkwardness, we made our way to Kandagash, where we were hassled on the way in by kids and drivers alike, with even the police stopping to have a look through our cart. Coming across a restaurant we attempted to sit down for a drink but were refused service, until a large man acting like a mafia member talked to the staff and got us a table. He sat to chat and, though he did pressure us into buying food, turned out to be quite friendly. He left as our food was served, and we were left with a ridiculously hiked bill.

We didn’t shop due to the amount of hassle it would involve, and got onto the south road, finally facing Australia.

On the way to the next town we were invited into a village house by an English speaking Kazakh called Arnie, who let us wash and prepared a meal of traditional Kazakh food and fermented camel milk. He told us about Kazakh and muslim culture, and as we were preparing to leave insisted he fix our cart handle as well, lovely guy! He then led us out of the village via the well which he filled our water bottles from, and wholeheartedly wished us luck as we left. Unfortunately for Kieran, with the bucket system of cleaning, once shampoo got in the water it left no clean water to wash out shampoo in the eye, and he suffered a reaction.

The heat became ridiculous, but plenty of people stopped to give us water, a real blessing. The two guys in the delivery truck from the other day stopped again and gave us some ice cream, shortly after that another delivery truck stopped and three ladies gave us butter and sauces, and on two occasions a car pulled up and gave us iced tea. 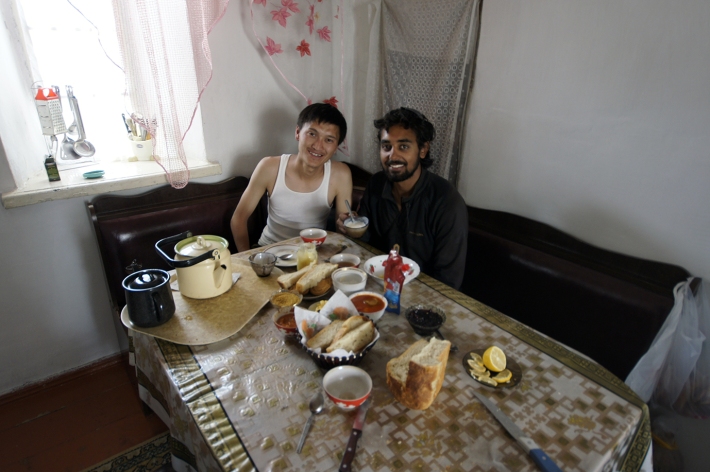