During our walks we were occasionally given water from passing traffic, chatted to some police, were informed by hired security of a gas pipe being laid next to the road from Russia to China (which we weren’t allowed to camp by), and we made it to a town called Dosser.

Before we walked through some oil workers on break by the roadside called us over to chat and gave us beer, in town a car of young men stopped to talk and film us on their phones, and as we walked out a kind older man gave us iced tea and Arjun a kufi (muslim hat). The heat was becoming increasingly difficult to manage, and the insect population had began to stir from its winter sleep.

The next town of Makat proved a problem to our map, which which off the main road and showed no route through back onto it. We proceeded regardless as we needed to restock on food and water, and as per usual ended up with a lot of people stopping us and chatting, though all pleasant. Unfortunately no one could help with directions, with every person we asked saying something completely different. We continued, heading on a compass bearing, until we ran out of town and road, and were lucky to run into some more oil workers who pointed us confidently down a dirt track, saying it would lead to a tarmac road which led out to the main road. We followed the directions to the other end of town, past some wild camels hanging around town, where we successfully found some tarmac, leading out of town. We stopped out of sight of houses but still among buildings and set up camp.

Trying to find our way to the main road the next morning turned out to be a joke. The tarmac ended without warning or reason, there was no one about and no traffic in sight. After debating what to do for a while, an oil worker turned up out of nowhere and basically pointed out into the desert, saying the main road was about 5km out there. With no choice but to spend a day backtracking, we set off, Kieran taking as much weight off the cart as possible to help prevent rough road damage to the wheels. After a good couple of hours of dragging the cart through sand and heading toward an empty horizon, we came across a sparsely gravelled track. In complete disbelief, Arjun checked our location on his phone, and we had arrived at the ‘main road’, nothing more than raised sand with a bit of gravel, albeit with many different coloured rocks…

Over the next few days the heat got worse and we were unable to escape it, no shelter of any kind, so we tried walking after sunset to see how much distance we could safely cover. Didn’t work out too well, just resulted in banging up the cart on the awful surface and trying to find camping in the dark, with who-knows-what creatures crawling around. We did meet some interesting people though, including a Dutch couple in a campervan and a couple of groups of 4×4 drivers, all doing the Silk Road route. What little traffic there was however literally blazed their own trails through the sand, that’s how bad the ‘road’ was, which was an issue for us as we had come to rely on truckers giving us water…

We thankfully came across a roadside cafe by an oil well, where we hydrated and endured a very annoying child trying to take our things. After leaving, we saw a village a little off the road, and met a young man who kindly helped us find a shop. The shop turned out to be a large collection of food stacked up in someones living room, no sign outside or anything, literally a house like all the others in the village.

With the road not getting any better, we tried reorganising all the gear, getting weight off the cart and onto our backs for the sake of the wheels. It made walking more difficult for us, but it was only getting hotter and we were almost always low on water, making more space for fluids a priority. 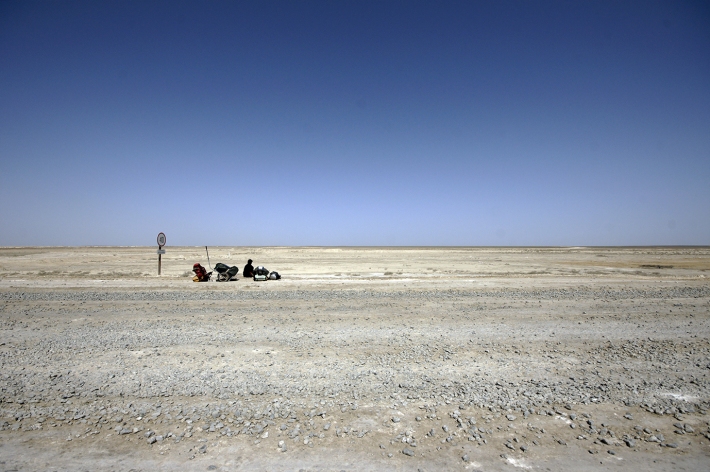 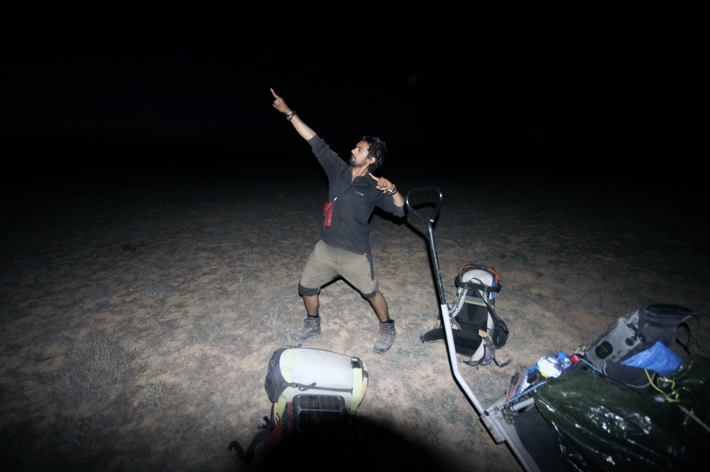 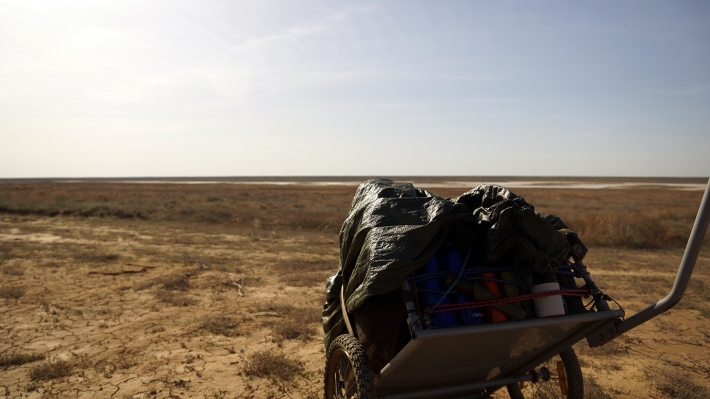